Off the see the 'Super Bloom'.

I had been following the news of the 'Super Bloom' of wildflowers online and in the Review Journal. I called the Death Valley National Park (DVNP) Ranger station and he confirmed that the wildflowers were at peak. He said the best bloom right now were those south Of Badwater Basin. I talked to my neighbor Jean and asked her if she wanted to drive over to see the wildflowers. Yes! was her answer. Her daughter Jackie was visiting and wanted to go as well. We picked Tuesday March 1st as our day to visit DVNP. I figured Tuesday would be less busy than the weekend.

I wanted to leave at 7am, but the ladies thought 8am was more realistic. I fired up my Odyssey and picked them up. Since they live across the street, it was not a difficult task! We drove state route 160 to Pahrump, and then state route 190 straight to the Furnace Creek Visitors Center. Bathroom break, chat with the Ranger on duty, got a wildflower map and we headed for Badwater Basin on 178. We started seeing yellow flowers as we approached Badwater, but knew the best fields of wildflowers would be south of Badwater Basin. At mile marker 20, we saw lots of cars pulled off the road and people walking among the flowers. I found a spot to pull over and we all got out. I grabbed my Canon G11 and walked out into the vast field of yellow flowers. Great vistas of flowers in every direction. Several couples ask me to take their photo and of course agreed. One lady had a professional video camera on a tripod. She told several of us that she was in DVNP yesterday and thought the best expanse of flowers were between mile post 25 & 26. After getting all the shots I wanted, I told Jean & Jackie that we would drive down to mile post 25. 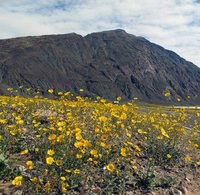 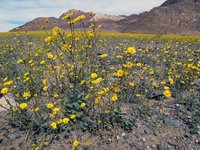 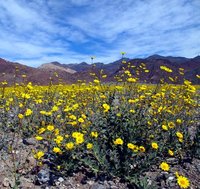 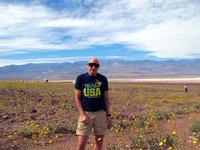 That turned out to be great advice. Plenty of places to safely pull off the road. I parked and walked out among the flowers. This was the best spot for flowers and I started getting shot after shot. I was happy to stay a bit longer, but both ladies said it was too hot and wanted some a/c. I fired up the van and got the a/c going. It was mid 80s (30c) on March 1st, very pleasant day. Warm enough for shorts, but not really hot. We drove back to Badwater Basin and got out for a few photos of the sign. Badwater is 282 feet (85.5m) below sea level. Also the hottest place in the US with a record high of 134 (56.6c). Badwater came by its name honestly. The water that seeps out of the surrounding mountains is so salty to be undrinkable for man or beast. DVNP in the summer months is almost unbearable. It routinely goes over 120 (48c). Then you really need the a/c going and plenty of water! A few shots of Jean & Jackie on the salt flats extending out from Badwater Basin and we called it a day. 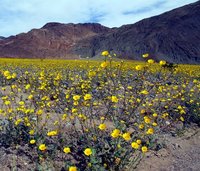 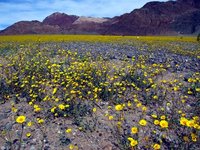 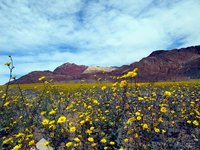 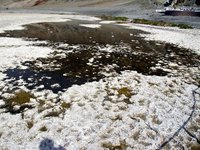 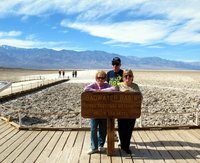 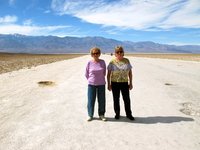 I drove back to Pahrump and we picked Denny's for our lunch stop. After lunch I filled up the gas tank and back to Las Vegas. We got home at 4:30 and all agreed it had been a successful day. We got to see the Super Bloom and I had the photos to prove it!