Off to Mui Ne

Taking a look at a new beach and touring the sand dunes.

My friends did not want to visit Mui Ne (MN) and decided to take the overnight bus to HCMC. I talked to them after the trip and both "V" & "R" hated the overnight bus. If you are a large person, close to 6' tall or over 200 lbs, this bus can be an ordeal. It is an impressive looking bus, large and new. But the reclining beds are not conducive to a good night's sleep, so say my friends. The shape and size of the beds were not to their liking. I took the day bus to MN by myself, so have no opinion on the sleeper bus.

I said goodbye to Huong, the front desk manager, and checked out of 'Nice Hotel'. I will be recommending this hotel to all those TP members heading for NT. I walked over to the Sinh Cafe office, next to Cafe Des Amis on Biet Thu St. The bus to Mui Ne leaves at 9:00am and it left on time, 80,000VND. The Sinh Cafe office tries to get you to book a hotel room in MN while in NT. At $30/nite for their affiliate, The Mui Ne Resort, I passed. I knew I could do better than that within minutes after arriving in MN. It was an uneventful 4 hour ride to MN. I had only allowed one day/night in MN, so I paid attention to the layout as we entered MN. It is a very long and narrow city, not conducive to walking around as is NT. We stop at the Mui Ne Resort, the HQ for Sinh Cafe. Of course several ladies meet the bus and try to convince you that The Mui Ne Resort is the place to be while in MN. It is nice; big restaurant, nice pool, beautiful rooms, but way out of my price range at $30/day. After a quick look, I went into the Sinh Cafe office and booked my bus to HCMC. After paying the 80,000VND, I asked the girls if they knew of a place with $10 rooms. There was a guy on a moto just outside the office and she waved him over. He said his family had a hotel just 50 meters away with $8 rooms. I hopped on his bike and took a look. It was OK, small fan rooms plus some double rooms with a/c, tv. Restaurant in the center courtyard. It also had its own beach, as do most hotels in MN. He quoted me $12/nite for the larger a/c room and I decided to stay in a better room. They run a tab at the restaurant, the way it was on Koh Samui years ago. They keep track on all your charges, pay when you check out. This place was run the same way. I cannot find the hotel name in my notes, sorry.

I had lunch and got dressed for my moto tour of the sand dunes. The guy who brought me to the hotel had quoted me $10 to see the dunes and Fairy Springs. I said I would pay $8 to him or go rent a moto and do it on my own. He agreed $8 was enough for a few hours sightseeing. I really preferred letting him use his moto as I did not want to rent one, put petrol in it and find the places on my own. I had lunch, put on my long pants, grabbed my windbreaker, camera and off we went. We stopped in town to put some petrol in the bike. He asked me to pay now as he did not have enough to fill the tank. No wonder he agreed to my $8 offer. We went to the white sand dunes first and it is farther than I thought. It took about 30 minutes to get there, getting buffeted all the way with high winds. It had to be over 30mph and it made for a difficult ride. I had on my sunglasses and hat, but was still getting sandblasted as we rode along. We had to walk the bike through a couple areas where the sand had piled up on the road. Once at the white sand dune area, you then walk a few hundred meters to a small restaurant/rental shop. I was not going to be sliding down the dunes, so I did not need the plastic sleds they rent. I then started hiking up the nearest sand dune. It is pretty spectacular, but the high winds made it a very short hike. Sand blasting you in the face is not conducive to hanging around. I took a few photos and headed back to meet my driver. He was hiding from the wind in the restaurant. Can't blame him. Off we go back to MN. Another exciting ride back, wind almost blowing us over several times. We stopped at the red sand dunes, right by the road. Plenty of kids hanging around, playing games and trying to rent plastic for you to slid down the dunes. I wanted to get a few photos, but was not up for sand sliding. I hiked up the large dune right by the road and got my photos. The dunes are impressive and I would have liked to see more of them. You would need better legs than I have or a jeep to appreciate just how large of an area the sand dunes cover. Back on the bike, we head for the Fairy Springs. It is right in town and I probably would not have found it on my own. A very small business is the parking area for the start of the fairy springs walk. Again, my guide chose to stay with his bike and let me try it on my own. You walk a short ways on a trail and then you take off your shoes or sandals and start walking upstream. The water was just ankle deep and warm. It is a very scenic area and worth your time. I took some photos and decided to turn it around after about 20 minutes of walking upstream. It is a pleasant walk and would be great to have someone along to share it with. One of the negatives of travelling alone. It was only a short ride back to the hotel and my tour was over. I thanked my guide and headed for my room. I needed a shower and a bit of rest.

When cleaned up and rested, I had dinner at the restaurant. The food was good and very reasonable. Many meals for less than 25,000VND. There was nobody to chat with, so I decided to take a walk after dinner. I chatted with several ladies that were touting their restaurant or guesthouse. There are several places close to my hotel that were right at $10/nite. MN has plenty of high end resorts with prices to match, but there are places to stay that will not break your budget. When I got back from my stroll, there were two girls sitting at the restaurant playing cards. I did not know the game they were playing but watched anyway. I asked them if they wanted to learn a new game. Ann from Sweden and Sadia from Iran, now living in the UK were ready for a challenge. I taught them 'up & down', basically spades, but trump changes each round by turning over a random card. They beat me and were ready for another round. I lost that round as well, but had fun chatting with them. They were off to Nha Trang next, so I scrolled through my photos and showed them some NT shots. I gave them an address card from the Nice Hotel and gave them some ideas on where to eat, sightseeing, etc. It was now almost 11:00pm, so I called it a night.

The next day I had BF, read my book and then walked the small beach out front. Some photos and back to shower and pack. I walked over to the Sinh Cafe and got ready for the bus trip to HCMC. I was only in MN for about 24 hrs, but did think it is worth a stop. I like NT much more, but Mui Ne is a decent beach, worth a few days when in VN. Below is a fan room at my hotel, the beach, Fairy Springs and some dune shots. 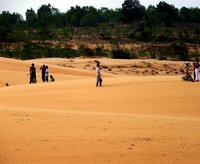 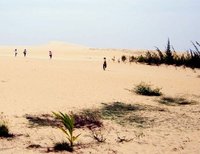 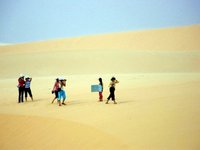 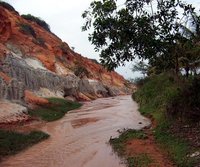 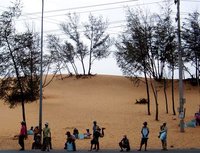 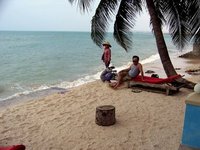 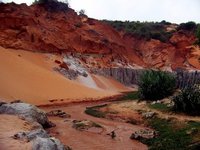 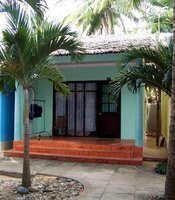 Really enjoyed reading this, Mike. Thanks for pointing me in the right direction! Chix.