Off to see the Northern Lights II

Saturday-Sunday:
After another poor night sleep, I got up at 6:30am and headed upstairs. Hot chocolate, toast, wait for someone else to hit the kitchen. Scott, Nancy & Debbie were upstairs at 7am and ready for BF. They were going over for the Yukon Quest, premier dog sled race in Fairbanks. Scott & Nancy would help with the start of the race, then drive to Circle AK to check in the teams as they arrived. The Yukon Quest is 1,000 miles (1,600km) long and takes 7-8 days to complete. I would not see Scott & Nancy again. They would not be back in FAI until Wed. afternoon and I had to be at the airport by 10am for my flight home. Debbie would be taking care of the hostel while Scott & Nancy were gone. They drove away at 8am. Andre & Fabio came up at 9am and called for a taxi. We exchanged e-mail address, said goodbye and they started the long trek back to Mexico. I had my oatmeal, banana, toast, hot choc. then got ready to walk over for the race.

I packed my day pack with camera, granola bars, water, map and started walking. Cho has FAI maps in the living room and I had asked Scott the easiest way to walk downtown. Pretty easy really. The hostel in on 9th Ave. Walk to 1st Ave, turn right, walk to downtown. It was cold, about 10 (-14c) but walking helped warm me up a bit. Once I crossed Airport Rd, I just followed the crowd. Within 10 minutes I was at the starting area for the Yukon Quest. Got out my camera and got some shots of the trucks, kennels and the mushers getting their dogs ready. The PA announces when the race starts and most of us try to get a spot to watch/photo the teams as they leave the starting line. 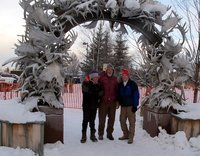 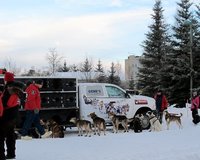 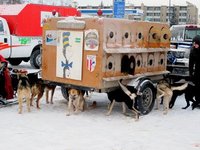 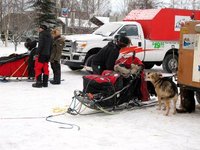 The teams follow the frozen Chena River for several miles before they go overland. I walked away from the crowds to get better photos, got an overhead shot and then walked to the Visitors Center to warm up. Into the VC, bathroom, warm up. There is a bus stop right outside and decided to take the bus back to the hostel. I found out from Cho that all seniors ride for free. Nice perk and makes it easy to get around FAI, including the airport. I took the red line to the Noel Wien Library, got out and looked for a book to buy. I brought a Jack Reacher novel with me but finished it. I thought there would be plenty of paperbacks at the hostel but none I wanted to read. I found one worth buying and walked back to the hostel. It is only 1 block from the library. 9th Ave Hostel really is a good location. Right on the red line for the bus, can walk to downtown, restaurants, bars, library. 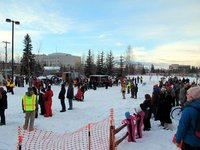 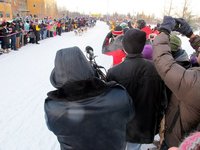 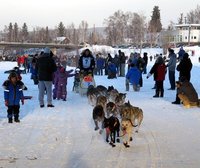 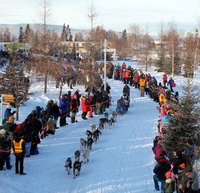 The hostel was empty when I got there. Cho gives you a code to get in the back entrance, the mud room where you take off your boots. I showered, got into comfortable clothes, e-mailed, read and waited for Debbie or Till to come back. Till arrived and started packing. He leaves at 8pm for the airport and that leaves Debbie and I in the hostel. I had my scrambled eggs, toast at 6pm and decided to go out for the NLs again. The aurora website said it would be a good night so I booked the van again. At 9:30pm the van arrived, I was first on again. First on, last off. The driver made the same rounds as Friday, picking up fellow NLs viewers from various FAI hotels. We got to Chandalar Ranch at around 11pm and the NLs were on display. Same routine, downstairs, stand in the snow, got a few photos and then I decided to go up to the balcony. I did not have the use of a tripod tonight. An earlier photographer rented it before I got there. But, I got some good shots by using the railing and holding the camera as steady as I could. It was zero (-17c) at the ranch that night so we went in to warm up, back out for more photos many times. The NLs really fired off tonight and all of us were glad we came to the ranch Sat. night. 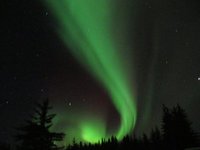 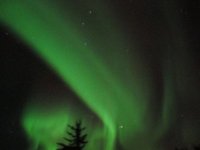 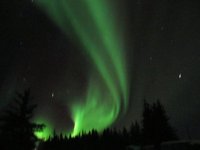 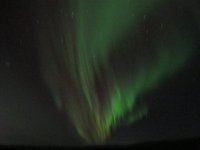 The real treat for several of my group were the Chinese girls. It was Chinese New Year that weekend and Chandalar Ranch was packed with Chinese. They have rooms, food, tours and some guests basically spend their holiday at the ranch. When the NLs were really active, pulsating regularly, several of the girls laid down in the snow and started screaming in Chinese. Well, young girls get excited and they let loose! It was fun for the older crowd with me on the balcony. None of us are going to lay in the snow and none of the men are going to scream about seeing the NLs. No matter how spectacular they were! This is why I came to AK in Feb. The NLs really were special tonight and I got to see & photograph them. Everyone at Chandalar Ranch knew they saw something special tonight. Viewing the NLs really are a crap shoot. Some nights are cloudy, some nights they just don't fire off. It all depends on the sun. When there is a high amount of solar flares, you get active NLs. I was told if you are in FAI for 7 days, you have a 70% chance of seeing them. I got home at 3am and went to bed. I will have the room to myself until I leave. That was really a lucky break. When it is busy, there will be four guys in this room. 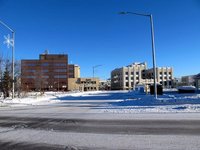 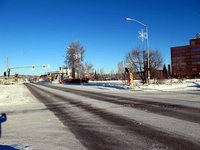 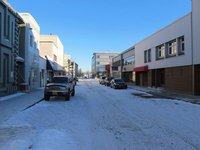 Sunday was Super Bowl Sunday and the buses don't run. Not much I wanted to accomplish today. I had my oatmeal, chat with Debbie, decided to walk both for fitness and to see if there was a bar where I wanted to watch the Super Bowl. It was about an hour before kickoff and the streets of FAI were basically deserted. Took a few photos, went into a bar, but their menu was basically meat. Since I am a veggie, decided it was not for me. Walked home and watched the Super Bowl with Debbie. We both wanted Denver to win, so it was an enjoyable experience. We had the leftover stir fry, computer, read, chat, did my exercises, shower, went to bed at 10pm.

Posted by vegasmike6 16:27 Archived in USA