Off to see the Northern Lights III

Monday-Tueday
I was up early as usual. Waited for Debbie to get up, had my BF and decided to visit the UAF Museum of the North. We chatted and she said it was worth visiting. I got the red line bus in front of the library, out at Fred Meyer. Transferred to the Blue line bus, it stops at UAF. Then you get on a free UAF shuttle that takes you right to the Museum. Paid $17, entrance plus movies. They run 3 movies on Alaska, I saw all 3. In between the movies, I would stroll the exhibits. Plenty of photo ops, plenty of walking. After seeing everything I wanted, I hit the Gift Shop. I bought a NLs calendar, well worth the $14. Every photo better than most of us could ever take. Of course they are pros, live in AK and can go out every night. Took the shuttle to bus stop, blue line to Fred Meyer. I saw a Subway across the street from the Safeway store. I bought a foot long veggie delite, bought some bananas, bus to hostel. Had my Subway, computer, read, hung out until Debbie came back. She was visiting with her daughter and had a good day as well. Did my exercises, shower, TV, read, bed at 10pm. 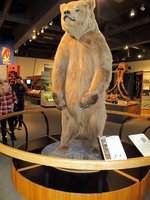 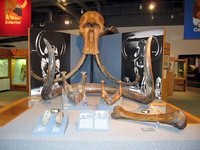 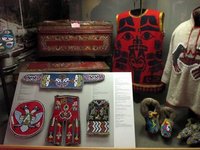 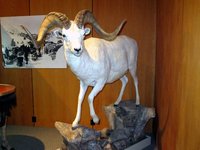 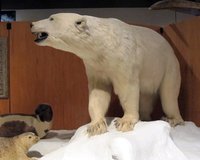 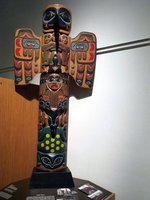 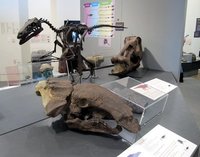 Tuesday was going to be my last day in FAI and I had signed up for the Arctic Circle (AC) tour. $220. A bit more than I wanted to pay, but I had e-mailed Jean about it and she told me to go. How often would I be close to the AC? True, so I put it on my credit card and got over it. I did go for a walk after BF, back, then my exercises. Shower, packed my bag, got ready for the tour. I was picked up first, then Matthew picked up the other people. A family from China, college age daughter spoke very good English. A couple from Minnesota, Matt & Linda were at the Wal-Mart waiting. They were staying outside of FAI and had driven their rental to Wal-Mart. Off we go to the AC. First stop is a well known petrol station/restaurant a few hours outside FAI. I have seen it on Ice Road Truckers. Bathroom, walk around, onward. We are paralleling the Trans-Alaska Pipeline or TAPS. All vans stop at the main pull out. Plenty of parking, pipeline close to the road. We all got our photos, learned about the pipeline. 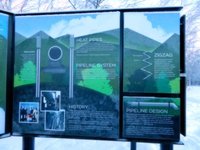 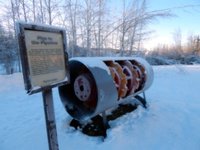 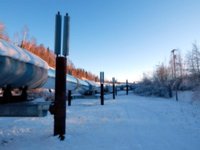 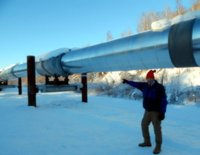 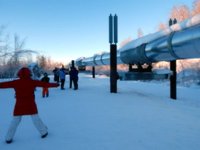 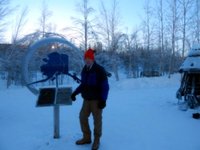 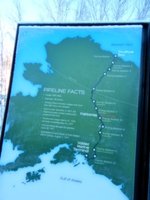 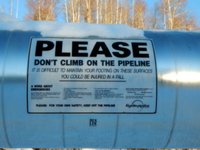 Next stop was Wickersham Creek Trail. Matthew gives us enough time for bathroom break, short hike if we so choose. We turned onto the Dalton Highway and got out at the sign. Matthew took the group photo with my Nikon and then it quit working, Cold battery was the culprit. I switched to my Canon G11 and kept it warm as I could for the rest of the tour. 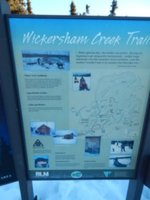 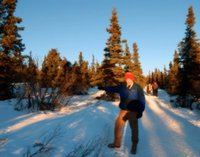 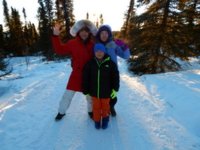 We crossed the Yukon River and stopped at the rest area. Vehicles are not allowed to stop on the bridge. Cameras are monitored 24/7 for bad behavior we were told. Bathroom break and several walked down to the river. It was cold, dark and I stayed in the van. Linda took a flash photo and it was not bad. Should of gone down to the river. I asked her to send me the photo but she never did. We stopped when the Chinese father saw snow covered trees and wanted a photo of them We all pile out it really hits you how cold it is out here. Back in the van and we drive until we hit the AC sign. Other vans are there first and we wait in the warm van until they get their shots. Finally it is our turn and I have Linda take several of me at the sign. Then Matthew takes a group shot and we scurry back into the warm van. Matthew tells us his thermometer says it is -17 (-27c) at the sign. It is 10pm and we will stay until midnight to see if the NLs come out. Hot chocolate is served and I eat my last half of my Subway sandwich. 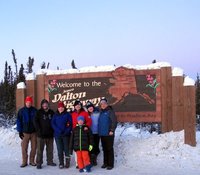 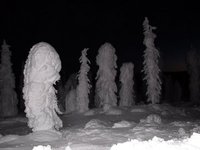 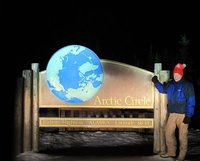 We have a tripod to share and around 11:00pm the NLs do fire off. We take turns sharing the tripod and I get a few good ones. I had the Chinese girl stand there for a more interesting shot. Just as it was time to leave for the long drive back, we got very lucky. I had really only seen green NLs so far, but we got some other colors at midnight. Got probably my best shot and Matthew told us we had to leave if we were to get back by 4am. 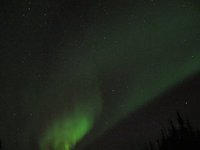 Not much talking on the way back. Most of us tried to sleep or at least rest. Matthew dropped off Linda & Matt, then the Chinese family and I was last. We all talked about giving Matthew a tip and decided $10/person was fair. He really knows Alaska, the Dalton, pipeline and was a good driver. You want a steady hand on these snowy, icy roads. They do carry emergency SAT phones, flares, food, water if the van breaks down in the middle of nowhere. I was last off and was in bed about 4:30am. Going to be a short night's sleep as I wanted to get up at 7am, to shower, eat, pack and get on the 8am bus to the airport. Red line to Fred Meyer, change to yellow line to the airport.

In order to get a better price, they had me fly to Anchorage, 3 hours, then Seattle. An hour and then on to Vegas. Got into McCarran around midnight. Long day and was ready to shower, go to bed. My Alaska NLs adventure was over. I am glad I went, got to see the NLs and visit the AC. Doubt I will go up to FAI again. Once was enough I think. There are other places I want to see first before I would do that again.

Posted by vegasmike6 23:02 Archived in USA