So You Want To Shoot A Machine Gun!! 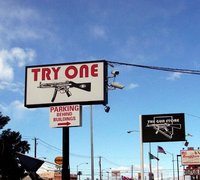 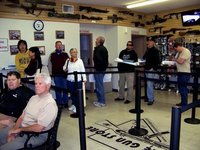 It seems a good many of our visitors feel the need to shoot off a few dozen rounds from a machine gun. We have several indoor ranges where you can make this dream come true! Apparently you cannot shoot machine guns anytime you want in other countries. With the right licenses, an American citizen can legally own and fire his very own AK-47, M-16, MP5, Uzi or whatever else you might care to own. Some citizens from other countries might disagree, but Americans do have the right to own and fire their own personal firearms. This includes: pistols, rifles, shotguns, and yes, automatic weapons if you qualify for the federal license.

Jens and Anders are two guys from Denmark that came to Vegas for help buying a Ford Expedition. Plan A is to tour the US for 6 months and then return to Vegas for help selling their Ford. The Expedition does not get very good gas mileage, but they wanted an off-road vehicle that was big enough to sleep in, so that is what we started looking for. It took several days, but we found an Expedition on 'craigslist' that was in decent shape and was under their budget of $4K. We got it insured, went to DMV for license plates & registration and they were ready to hit the road. They are going all the way to New York and then work their way back to Vegas. 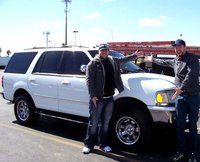 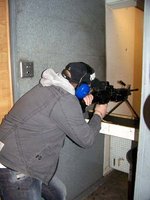 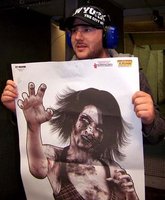 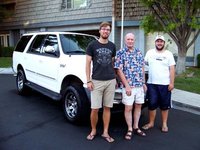 The guys told me that they wanted to fire off some rounds with a machine gun. It turns out that Denmark is quite strict on gun ownership. Forget a machine gun, it is difficult to own any gun. Anyway, they wanted to shoot machine guns, so I took them over to The Gun Store. Timing is everything in life and shooting a machine gun is no exception. I dropped them off around 1pm and took my mom to lunch and to her hair appointment. When I returned 1.5 hours later to pick them up, I got the bad news. There was a 2 hour wait to get on the shooting range. Afternoons get very crowded at the Gun Store. We decided on Plan B. Come back tomorrow when they open at 9am. That turned out to be a good decision. We got there about 5 minutes before opening and were about 6th in line. Anders decided to fire the M-4 for $50 and Jens decided on the SAW 249 for $60. You get 25 rounds when you choose the M-4, 40 if you choose the SAW 249. Both Anders & Jens got excellent instructors. They take the time to explain the safety procedures and how to fire the weapon safely. We never did feel rushed and the guys had a great experience. I took photos and the guys got to fire machine guns. Both felt it was worth the money and plan on shooting again when they return to Las Vegas this fall. You might want to shoot a machine gun while in Las Vegas yourself. Do a bit of online research and decide which store is best for you. Both guys got a $5 off coupon online and used it when they were at The Gun Store. Then we went over to Boulder Station for their BF buffet, they used the $5 saved for the buffet. I highly recommend either the BF or Lunch buffet at Boulder Station. Very good buffet for a fair price. Much better value than anything you could get on the Strip. We must have eaten at Boulder Station 5 times while the guys were in Vegas. Jens enjoys a good meal and was thrilled with the low prices of the Boulder buffet. I told them once they leave Vegas, they would never get such good value in any other state. When they came back to sell their Expedition, they agreed with me. Vegas is a bargain compared to the other cities they visited.