A Short Trip Over to Calif.

My friend Chris came back from Thailand for the month of August. I have told him before that August is the worst month for Vegas and for traveling around the West. My advice fell on deaf ears as he came back July 30. Anyway, he suggested a short trip somewhere during August. We kicked around several options and finally decided on Mono Lake, Yosemite NP. I have never been over to Mono Lake and have not been through Yosemite NP in over 20 years. We picked a Monday late in August and started planning. We decided to stay in Bridgeport Calif the first night. I checked on the Internet and found out that all the motels were at $100/night or more. I called a few motels and made the decision to pre-book something. We got the last room that had 2 queen beds at the Redwood Motel. $105 with tax. There were cheaper rooms down in Bishop, but we would have to drive about 40 miles out of our way. Did not make sense, so Redwood Motel became the winner.

Our departure day arrived, sunny & hot. No surprise there. Vegas in August is going to be hot, perhaps some clouds/rain, but certainly over 100. Chris came over to my house and we used my car. We used his Mercedes for our Carlsbad Caverns trip so it was my turn to drive. Chris arrived at 7am and off we went. The best route for us was to take US 95 North. We stopped at the Amargosa Valley junction with hwy 373 to take a few photos. The Cherry Patch Brothel is here along with a gas station and a few signs. I wanted to go inside the brothel for prices/photos but Chris pointed out the flaws in this idea, so I passed. The Brothel Art Museum is just down the road, but we passed. We popped a few photos and headed North.

We pulled into Tonopah and loaded up with petrol. This is the last decent sized town until we hit Bridgeport. Chris did not have BF so we stopped for a burger on the way out of Tonopah. He likes family run places and a local at the gas station recommended Cisco's Tacos. Chris was happy because Cisco's had big, messy burgers and milkshakes. I had my granola bars, so I passed. Chris declared it a winner, so we were both happy.

We took 95/6 over the border into Calif. When we hit Benton we took CA 120. We stopped at take some photos of the burned out forest just a few miles from Mono Lake (ML). A forest fire went through this area, July 2010. 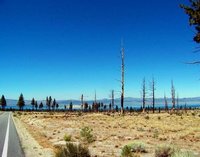 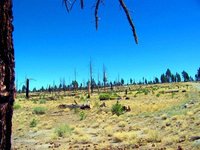 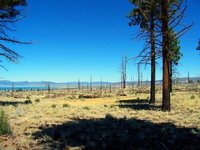 There is a dirt road off CA 120 to the South shore of ML. There is a Ranger Station here and we got our Senior Pass: $10. Now both of us can enter any National Park in the US for FREE! for the rest of our lives. Quite a deal for $10. We got our hats, cameras and headed for the South Tufa area of ML. It was just about perfect. Not too many other visitors, sunny but not really hot. We spent about 40 minutes walking the South Tufa area and decided to head for the Mono Basin Scenic Area Visitor's Center. We talked to the Ranger about the ghost town of Bodie. We did stop at the North side of ML at Black Point. Pretty much a waste of time. There is nothing to see compared to the South Tufa area. 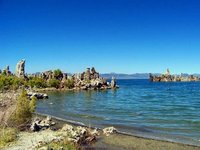 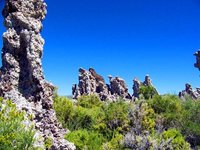 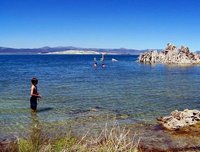 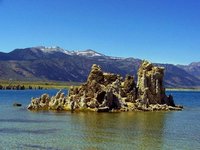 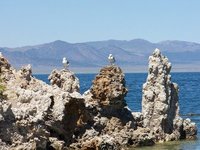 We took US 395 North to the road to Bodie, 270. The road is paved most of the way to Bodie. We were warned several times that Bodie closes the entrance at 6pm. It was now about 4:30pm, so we were in good shape. 13 miles off 395, the last 3 miles are gravel. It is not too bad, but certainly got all the cars covered in dust. We found out it was $7/person, NOT per car load. Calif. is broke so I guess I can see the logic. In 1962 the Calif State Parks System took over the administration of Bodie This is the first/last time I will ever visit Bodie. Not worth a return visit IMO. We got our hats, cameras and walked down the hill into Bodie. It is certainly in pretty good shape for a 'ghost town'. We were told Bodie is allowed to stay in a 'state of arrested decay'. In 1880, Bodie had almost 7K residents. Over the years, the price to extracted the gold ore became too expensive and the mills started shutting down. In 1942, the War Production Board ordered all nonessential gold mines to close. Bodie never mined gold again. 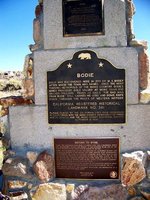 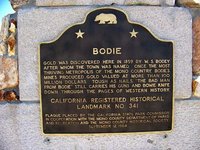 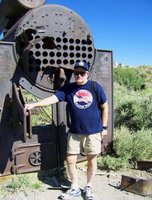 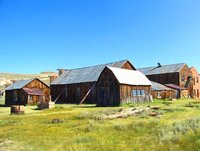 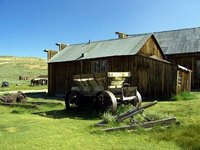 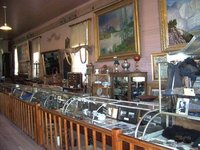 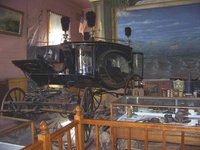 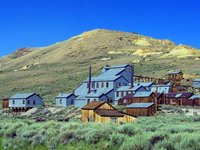 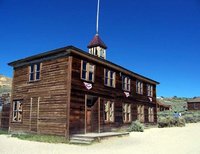 Chris and I walked most of Bodie, stopping often for photos. A few buildings are open and we poked our heads in several of them. It is interesting, but once was enough. After about an hour of walking around, my knee was hurting and we were ready to leave. Back on the gravel, over to 395 and heading to Bridgeport. We saw on the Internet that there is a Travertine Hot Springs South of Bridgeport. Chris wanted to see it, so we followed the map we picked up at the ML Visitor's Center to the hot springs. It is a terrible dirt road most of the way. My Avalon was protesting, as was I. We made it, but never again. The hot springs are a major disappointment. There were 5 people relaxing in one of the hot springs, but I would not get in it. The dirty looking water was no inviting IMO. After a few photos, we eased our way back on the dirt to 395. 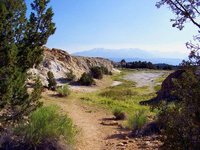 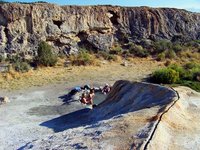 Into Bridgeport, we found the Redwood Motel w/o much trouble. Bridgeport is pretty much a one street town. We checked in, got our key and took a look at the room. Not much, small, old. We decided to get something to eat before dark, so we just dumped our bags and went looking for a place to eat. Chris saw the Burger Barn, so he voted for that. They did not have a veggie burger, so I walked next door to the Jolly Kone. Kind of an old fashioned drive-in. They had a large menu and that included a veggie burger. I had that plus a milkshake, under $10. After we had eaten, we took at a look at the historic Mono County Jail. It was almost dark so the photos did not turn out very well. Back to the Redwood Motel, I took a shower while Chris started editing his photos on his laptop. I watched some TV while Chris showered and we both decided to call it a day. Day one of our Calif. adventure was over. 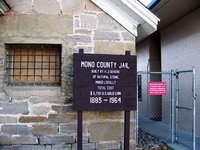 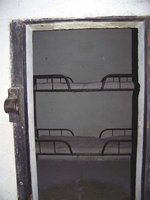 Posted by vegasmike6 11:15 Archived in USA