I had an OK night's sleep. The bed was just average, but I was tired and took some Advil PM. Knee was hurting all night, but was better in the am. I cleaned up and waited for Mike. Plan A was for him to go to church with his sister, then drive Skip's truck to the motel. We would then go over for the Boeing Factory Tour. Mike shows up around noon and I follow him to the train station. Free park during the day. I follow his directions and we then see signs for the tour. The parking lot is almost full, that means plenty of people will be taking the tour on this Memorial Day Sunday. Inside and we see the bad news. The tour is $20 and Mike won't pay. He worked for Boeing back in the 70s and the tour used to be free. Not anymore. I pay and get a tour time about an hour from now. Our plan was to tour Boeing, then head over to the Museum of Flight. Mike asks me to take him back to his truck and that is what I do. A short goodby as I am not exactly thrilled with Mike's behavior. We had planned on going over to the Museum of Flight, but not now. I am not going to take the tour and then drive back to Everett and meet him.
Back and I take the 3pm Boeing tour. A short film on Boeing then we are shuttled by bus over to the plant. The Boeing Assembly Building is the largest (by volume) in the world. It is 427,000,000 cubic feet, (13,385,378 cubic meters). The Everett line is manufacturing the: 747, 767, 777, and the 787 Dreamliner. Not many are working on Sunday, but there is some activity. There is a fair bit of walking involved but I limp along and keep up. It is interesting to see the planes in various stages of construction and I would recommend the tour. Once. I will not go again. After 90 minutes we are shuttled back to the Future of flight and the tour is over. I get some photos of the displays at The Future of Flight, go up to the outdoor terrace and took a few of the planes waiting for delivery. 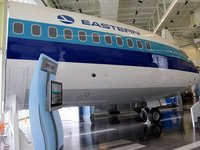 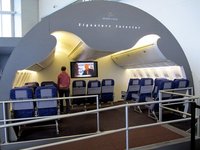 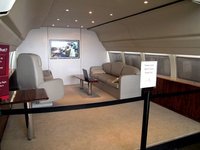 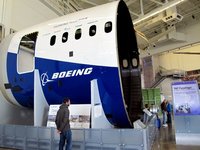 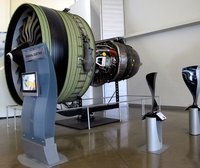 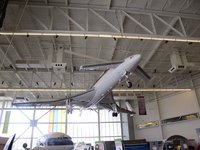 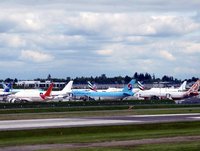 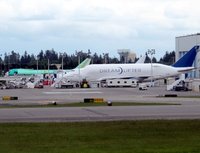 I have had enough of Boeing and decide to head for the airport. I have plenty of time and spot a Denny's on the way to Seattle. I stop for lunch/dinner, then head for Sea-Tac. You have to return the car with a full gas tank and I spot a gas station just a few miles from the airport. $15 fills it and I follow the instructions with the rental car return center. There is a shuttle to the terminal and I get there with a few hours to kill. I read my book, finish it and leave it for another passenger. It was a hardback copy: 'The Lost Symbol' by Dan Brown. It lasted the entire cruise but I don't need to carry it to Vegas. I found out at check-in that my 8:45pm Southwest flight only has 35 on it. Everyone that wanted to be in Vegas this weekend went days ago. Uneventful flight, got my bags, headed for the Bell Trans shuttle. They have a desk just outside exit 9. While pulling out my money, I put my NV DL on the counter. The lady tells me locals only pay $5 instead of $6.75. OK, a bit of good news. I got on the van at 11pm, but we don't go anywhere until almost 11:30. Lucky for me, the first stop is the MGM Grand. I get off and the valet & taxi area is just packed with excited guests. I arrived just as a big fight was over. Excited fans were hooting and hollering as they exited the MGM Grand. It turns out UFC 146 was held that night and my timing could not have been worse. I fought my way to the parking garage, found my car and stored my bags. There was a line of cars trying to exit the garage and there was no way I could back up into that mess. I walked back into the lobby area and decided to wait 30 minutes and let the garage empty out. There were dozens of girls in miniskirts & high heels strolling across the lobby and they provided something to look at while I waited. Fight night in Vegas and the ladies love to get dressed up. Some of the men made an effort, but almost all the ladies wore their sexiest outfits. After the lobby crowd thinned down, I went back to the garage, got in my car and headed for the exit. No waiting now and I headed for home. 8 days of free parking, no damage to the car and I did feel lucky it went so well. I would have preferred to have used the park & ride lot, but that option was not available. MGM Grand parking garage was the next best option IMO. With 6,000 parking spots, it is easy to blend in. I got home around 1am, took a shower and hit my bed. My Alaska Cruise adventure was over.

Posted by vegasmike6 16:13 Archived in USA