Back to Seattle, sightseeing. 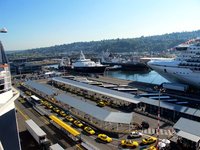 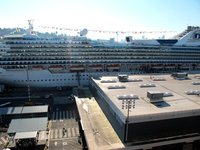 The Westerdam gets into Seattle at 7am and all passengers are supposed to be off by 10am. We get up at 7, to the buffet for our final BF. Eggs, pancakes, fruit, tea for me. Mike had several rounds of BF items and made sure he got his moneys worth for our final Westerdam meal. To the cabin to clean up, final packing. We get in line for the 9:30 departure, off the ship and try to find our bags. They are in the 9:30 area and we now have a decision to make. Plan A is to store our bags and see what we can of Seattle. Mike's sister lives north of Seattle and will put me up for Sat. night. Mike will stay another week visiting his sister & mother. We tried to get some info online about bag storage, but did not find out anything. Now we know why. 9/11 changed everything concerning baggage. No hotel will let you store a bag w/o staying with them. HAL will keep our bags until 3:30 for $6/bag. That will not do us much good as we would have to take a taxi back by 3:30pm to retrieve them. We planned on sightseeing until 5pm and then head for Arlington. The only real solution is to rent a car. National & Alamo have combined forces at Pier 91. Same quote and same shuttle van to the Hilton. A compact car is roughly $40/day and since I don't leave until Sunday night, I get one for 2 days. Mike decides he could take the bus up to his sister's house, so will only pay $20 towards the rental. OK, I want to see some of Seattle and pay the rest. Off we go on the shuttle van to downtown Hilton. I sign the papers and we get a small Nissan Versa. We store the bags in the car and head out. Parking is a problem and most of what we want to see is walking distance or a short bus ride away. Buses are free in the core of Seattle, nice feature for everyone. Mike knows the area and we walk to the Pike Place Market. Fresh fish, meat, veggies, flowers, Pike Place has been the place to shop for Seattle shoppers since 1907. This is the market where the 'flying fish' became popular. Pick out a fish and the fishmonger throws it to another guy. Great tradition, but don't get to see it. No fish are 'flying' while we stand around waiting. It is Memorial day weekend, perfect weather and is just packed with shoppers. We have to elbow our way through the crowds to get outside. We are not going shop, so why battle the crowd? We head for the small park along the market and can see the Norwegian Jewel. It runs the same cruise and same timetable as the Westerdam. NCL uses the downtown pier, much handier than Pier 91 that HAL uses. We would not have needed a car if we had cruised with Norwegian. Oh well, too late for that. 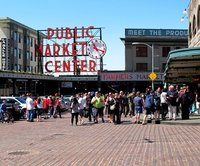 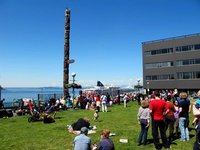 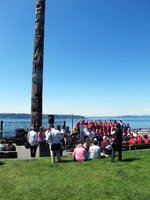 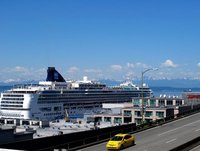 We walk past the Aquarium and head for the Underground Tour. Both of us need a bench at this point and find one at Pioneer Square. It is a beautiful day in Seattle. Sunny, not hot, perfect. It is Memorial Day weekend and we take advantage of the good weather. Along with thousands of others! The Underground Tour is $13 (senior rate)and I get my ticket. Mike passes, he has been on the tour before and won't pay again. Not the first time and won't be the last time that he left me to go on my own. It will be about 45 minutes before my tour starts and Mike heads for the library. Tour time comes and we are packed into a large room. It starts out on how Seattle looked 100 years ago. A much different city and street level has changed over the years. The big fire in 1889 allowed Seattle to re-design downtown. Now brick & stone, not wood for building downtown. They also went from a volunteer Fire Dept to a paid one. Our tour guide, Alli explains that Seattle is very hilly, same as San Francisco and street level has changed over the years. What is now street level is about 10 to 30 ft higher than in the 1800s. This assisted in the gravity toilets used then. Sewage would spurt out of the toilets at high tide. A real mess I am sure and one they had to fix. After the streets were elevated, the original ground level fell into dis-use. In 1965, Bill Speidal decided he could make money by giving underground tours of downtown Seattle. He was right, each tour was packed. He used Doc Maynard's Saloon on Pioneer Square as his headquarters. After the talk on why Seattle now has an underground, we break up into smaller groups of about 50. Alli is a wealth of info on old Seattle and makes the tour fun. There is not that much to see, so a good guide can make the tour worth your time/money. Basically Bill Speidal has rented out 3 sections of underground from the owners. We go from section to section, coming up to street level each time. We are walking around in what was the ground floor of the old buildings. Interesting, but not much to photograph or see. After 90 minutes it is over and I find Mike at the same bench we used before the tour. I don't blame him for passing on the Underground Tour. Glad I went, won't do it again. 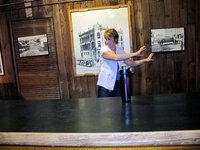 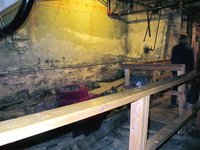 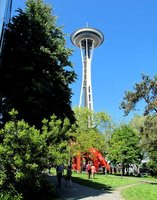 My knee hurts and so does Mike's. We limp back to the Hilton and decide what next. We find out that the annual Folklife Festival is going on over at Seattle Center. This is where the Space Needle is located and a huge park. We take the bus as close as possible and start looking around. It is really packed and hard to walk. Mike speaks Thai and we try to find where the Thai's have their booth. Mostly it is about food from each country, but many events are going on all day long. We do see that the Philippines is putting on a song/dance exhibition so we head that way. I am glad to sit down, but after a half hour, we had enough of the singing/dancing. We check with the information booth, but we cannot find anything Thai being displayed. We decide that we have had enough of the crowds and head for the Monorail. The Monorail has been servicing downtown Seattle since the 1962 World's Fair. The monorail route is 1 mile (1.6km) from the Seattle Center to Westlake Center. Fare is the same as the bus, $2.25 and will get us to a few blocks from the Hilton. It is now 5:30 and we have had it. Time to fire up the car and head for Mike's sisters house. I give Mike my cell and he calls to let her know we are heading their way. Now comes the bad news. Even though Mike got the OK for me to stay one night from his sister, she did not share that info with her husband Skip. Mike talks to Skip and I can figure out that I am not welcome. It seems they have dogs that bark constantly and bite strangers. Not well trained dogs seems like a good bet. I am pissed at this point and figure I will give them the car back and fly home that night. Once back at the Hilton, that option disappears. The rental office closed at 5pm. I call Southwest and get more bad news. The last flight to Vegas has left. My flight tomorrow is at 8:45pm, but they don't fly that flight on Sat. The only option now is to drive north and find a motel. Mike knows where there are some cheap motels in Everett. We find one for $45 and we find a Denny's for dinner. After eating, I take Mike to his sisters house in Arlington. I then head back to the motel in Everett, shower, read, bed. Day 8 is over

Posted by vegasmike6 09:12 Archived in USA