I was up at 7:30 and headed up to the Observation Deck. There are NP Rangers giving a talk on Glacier Bay (GB). This is the highlight of the trip for most of us. Only 2 ships a day are allowed into GB so you feel that you have the place to yourself. The captain gets as close to Margerie Glacier as allowed. We will be here for 4 hours, so plenty of time to get photos of the glaciers and surrounding mountains. This is why I brought a waterproof jacket. It is cold, windy and overcast. But, it is Alaska in May, so not a surprise. 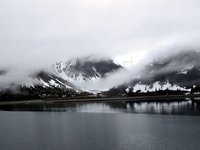 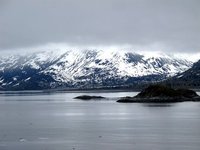 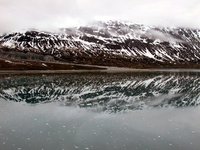 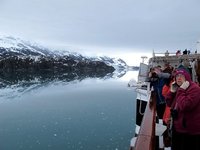 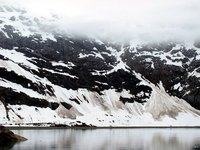 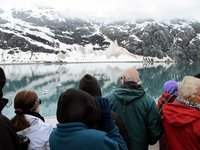 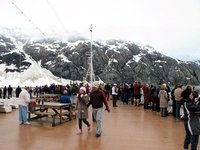 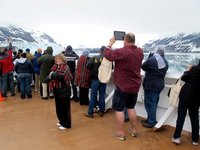 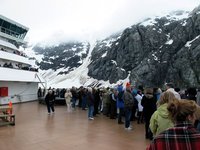 Mike and I get our photos and go back inside to warm up. We repeat that several times over the next 4 hours. Photos, inside, food/drink, back outside. Mike & I did get to see a large chunk of ice calve off the glacier. We heard it crack and then plunge into the water. Neither of us were fast enough to get a photo of the event, but felt lucky to witness it. The crew tells us that this is good weather for GB in May. We could have been dealing with snow or rain, so I guess we got lucky with just cold and overcast. The crew were right there with hot cider, or head inside for hot chocolate, coffee, tea. GB has spectacular scenery and will probably be the highlight of the cruise. 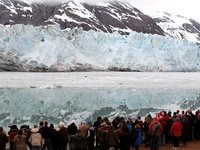 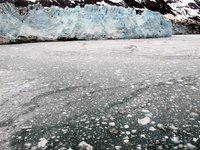 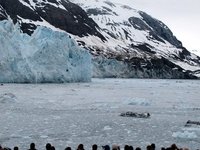 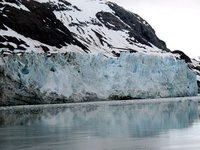 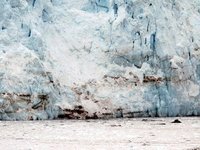 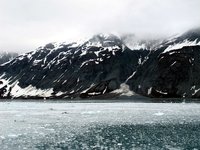 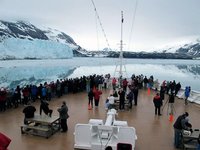 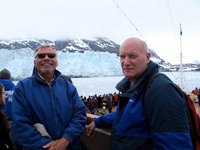 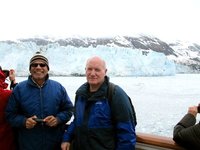 I went back to the cabin, got my workout gear and up to Lido Deck to the gym. Legs, stomach, ride the bike for 30 minutes. Shower and back to the cabin. There is another Digital Workshop on getting more out of your camera and decide to attend. I show Tony my photo of the guy holding up his laptop. Tony spoke about getting a firm platform for good pics. Holding a laptop at eye level is not what he had in mind! After class is over, I decide the best option is to lay down, do some reading plus bring my journal up to date. We have a 7:45pm seating in the Vista Dining Room and Mike and I set off around 7:30. Yesterday we had the table to ourselves, not tonight. Two couples are there, one from AZ another from Mass. Mike started feeling queasy from the ship rocking and rolling. It was smooth sailing in GB, not so when we hit open seas on the way to Sitka. Mike apologized and left for the buffet. It is mid-ship so he figured it would be moving less than the stern. Anyway, I had to hold up our part of the conservation by myself. The couple from Boston had been to Martha's Vineyard, so we chatted about MV. I drove a taxi on MV for 6 summers back in the 90's and we traded stories. The couple from Phoenix were another story. She was very quiet and let her hubby do all the talking. And boy did he talk! I am guessing he had a few pops before getting to the dining room and had a few more with dinner. He was pretty close to drunk by the time dinner was over. Tom broke the cardinal rule about not discussing politics or religion at dinner. We let him pontificate for awhile and then I had enough of his blather. I politely let him know his was not the only point of view and that he was a liberal fool. Well, that was probably not correct dinner behavior, but I was tired of his ranting on and on about how the wonderful democratic party was. The Mass. couple now steered the conversation back to more acceptable topics and we finished dinner w/o anymore fireworks. I had the onion soup, salad and veggie option, peach crisp for dessert. That was a great choice. They serve it warm with ice cream on top. Yum. The dining room is very hard to beat for a great dining experience. Way better than the buffet. Before the cruise, I thought I would just use the buffet every night. I did not want to dress up or order from the menu. I was wrong. The Vista Dining Room had very good food every night, plenty of choices, perfect service, a beautiful room with a great view off our stern. It was now 10pm and showtime. Tonight's show was the ship's company, Country/Western was the theme. Another good show. I stopped in the casino and found Reid & Eunice, waiting for more players. We got started and again tried to recruit a few more players. The table holds 10, but we rarely had more than 6. We bantered back and forth, not losing or winning much, but all of us had fun. We agreed midnight would be a good time to quit and so we did. I lost $30, so not much damage done. Back to 4105, Mike already in bed. I tried to be quiet and hit the sack as well. Day 4 was over.

Posted by vegasmike6 11:30 Archived in USA