I woke up Monday morning, Oct. 2nd to find out there had been a mass shooting on the Strip while I slept. The news went around the world that day and I started getting some e-mails from friends in foreign countries to see if I was OK. I decided to go out the memorial that grieving family, friends and sympathetic strangers had started on the Strip. I went Thursday morning and quickly found out it was going to be difficult to find free parking anywhere near the memorial set up on the median on LVBS and Reno Ave. I finally decided to park at the Harley Davidson Store across from the Welcome to Fabulous Las Vegas sign. It was a beautiful day, clear skies, temps in the mid 80s, (27c) no wind. It was about a mile hike to the Reno Ave. memorial. I took some of Mandalay Bay Hotel where the shooter broke out two windows and fired on the crowd enjoying the Route 91 Harvest Festival Sunday night. 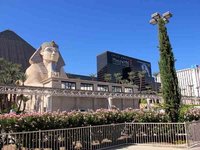 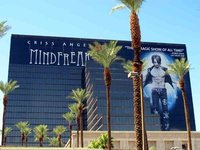 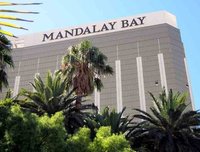 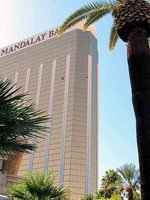 Once at the memorial, I saw several TV crews interviewing people about the mass shooting and their reactions, etc. I was approached by a Billy Graham volunteer and we started talking about what had happened Oct. 1. Ray had flown out from North Carolina on Monday afternoon to help and pray with anyone that needed consolation. Billy Graham Ministries has a crisis response team that goes to anywhere in the world that has experienced a crisis. Natural or man made. He told me that teams were in Texas, Florida and Puerto Rico right now helping those affected by the recent hurricanes. Ray has been in Spain and the UK this year for the mass casualty events there. 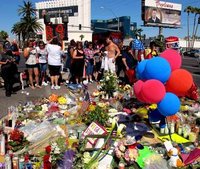 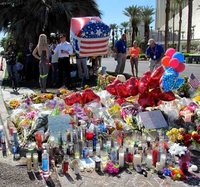 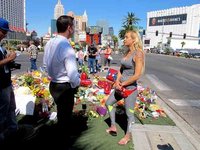 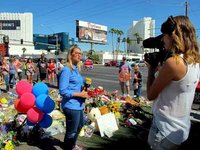 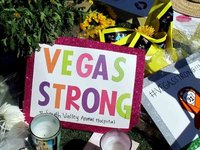 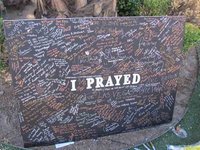 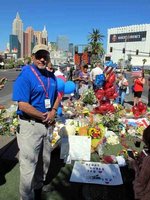 After spending about 30 minutes at the memorial at Reno Ave, I walked back to the Welcome to Las Vegas sign. There is another memorial there and hundreds of people were gathered there pray, mourn and express their sympathy for the 58 shooting victims and their families. There were a group of boxers there signing the Vegas Strong banner and a large boxing glove. Ex heavyweight champ Leon Spinks was there signing autographs and posing for photos. 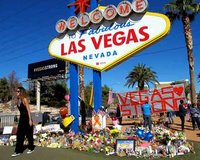 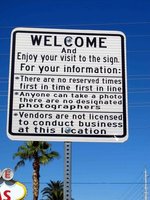 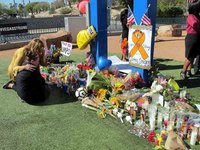 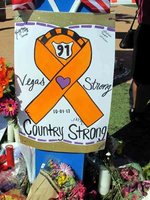 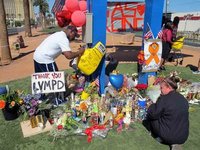 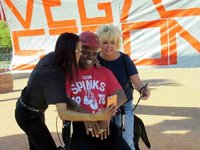 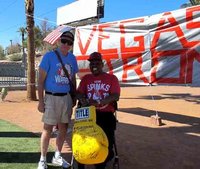 After paying my respects to the memorial and the fallen, I walked back to the Harley Store and drove home.

I saw on the news that night that a man in Chicago had created an individual memorial for each of the 58 victims and brought it to Vegas, I went back out to the Welcome sign Sat. morning and took some additional photos of the individual markers. The area was just packed and again parking was difficult. I pulled into the Metro Police substation close to the Welcome sign. I did not see any signs stating the public could not park there so I grabbed my camera and walked to the memorial. It was a emotional experience for many. I saw some family members sitting by the memorial for their loved just sobbing. This senseless tragedy has shattered hundreds of peoples lives. After about 30 minutes I had enough and walked back to my van. 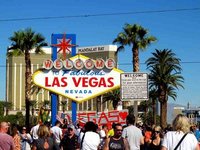 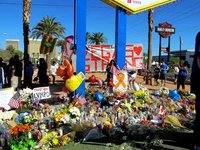 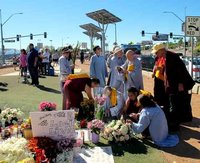 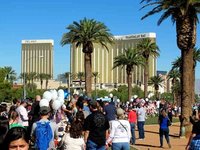 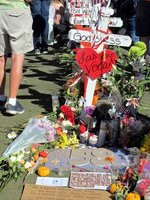 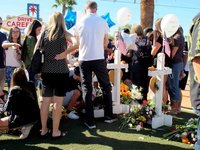 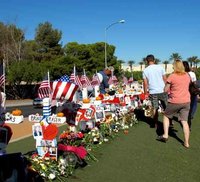 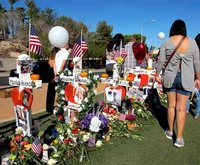 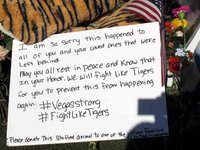 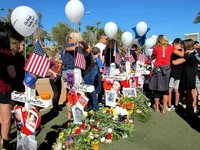 Las Vegas has really come together to donate blood, money, their time and energy to help the families of the fallen and the over 500 wounded. All those visiting Vegas in the next 30 days will still be able to see the various memorials set up to honor the victims of this senseless tragedy. #Vegas Strong.

Posted by vegasmike6 22:55 Archived in USA

Thanks for posting this important, topical piece. Tragedies such as occurred in Las Vegas are heart-rending. There are too many of these nowadays.