My friend Mike L flew to Vegas from Thailand to pay his taxes. He used to live in Vegas and has property here. Anyway, he wanted to get out of Pattaya during Songkran and visit with his Vegas friends for a month. We got many free shows, hit the buffets and I caught up with his life in Pattaya. He touched base with his Vegas friends. Mike was going to treat his ex GF to a cruise to Alaska for storing his stuff and his car. He stays with her the month he is in Vegas. Long story short, she could not get the time off in May for the cruise. I have been to all of the states except Alaska and volunteered to go. We started getting prices and dates. Since his mother and sister live in the Seattle area, he wanted to cruise out of Seattle. Plan A was for Mike to fly up a week before so he could visit his family. We picked Sat. May 19th as our departure date. Two cruise lines were leaving May 19th, Holland America Lines (HAL) and Norwegian. Several friends of mine had been to Alaska before and they said HAL was to one to go with. OK, HAL it is. Once we paid for our cruise, I booked a flight on Southwest: LAS-SEA the morning of the 19th. Mike left May 13th and we agreed to meet on the ship.

The Westerdam leaves SEA at 4pm, giving me enough time to fly in that morning and get over to Pier 91. Plan A was to use the Park & Ride, run by the RTC (our bus system). Free parking for a week, $2 bus to the airport. I had used this system several times flying back to Mass. to visit a friend. Always on a Tuesday or Wed. however. I found out that finding a parking spot on Sat. morning was not so easy. I spent 10 minutes trying to find an empty parking spot. No luck. I went to Plan B. Drive to the MGM Grand and leave it in there. They have 6,000 parking slots in their highrise parking garage. I found one on the 3rd floor, surrounded by other cars. Just another car in a sea of cars, I hope! Got my bags and walked to the taxi line. The guy ahead of me had luggage and was also heading for McCarren. We split the fare, $7/each and I waited for my flight. Flight was supposed to take off at 9:40, left at 10:15. Got in to Sea-Tac at least 30 minutes behind schedule. I had booked the shuttle online to Pier 91 for $21. HAL people were at Sea-Tac waiting for cruise passengers in the baggage area. I chatted with the HAL girls, $25 if you go with them to the ship. Should have done that, but had already paid. I found the shuttle area in the garage and waited for the van to fill up. Around 1:30pm off we go. 8 were going on the Westerdam, 2 to a Seattle hotel. We told the driver that we needed to get to the ship by 3pm. He stated he would drop us off first, then the hotel people. That changed on the way. Now he wants to drop off the hotel people and then us. OK, what choice did we have? Into downtown Seattle, heavy traffic and we are looking at our watches. At about 2:45pm he drops off the hotel people and we head for Pier 91. A few wrong turns and we hit the Pier at 3pm. The only good thing about being that late: no check-in line! Our group goes right to a check-in crew member, hand over a charge card and get our cruise card. HAL puts all expenses on your credit card, plus $12/day for tips. You are dinged $12/day to cover all crew members that provide service to the guests. Seems like a fair system, better than trying to find crew and hand them cash before you exit the ship. I am assigned room 4105 and try to find it. Mike has been on the ship since 2pm and he has been exploring. I just get my bag on the bed when we hear that the lifeboat drill (LBD) is going to take place at 3:30. This is mandatory. They take roll and tell us if you miss the LBD you cannot sail with the ship. A few rooms do not raise their hand when called. A few room numbers were called on the loudspeaker after the LBD. I hope they did not miss out on the cruise for being late. I never did find out. After the LBD, the Mikes head for the buffet. Along with most of the 2K other passengers! We have a 7:45pm dinner slot, but I was going to pass on the Vista Dining Room most nights. Or so I thought. Anyway, we hit the buffet and both of us found something we could live with. I am a veggie, but there are plenty to choices everyday. Limited buffet the first night we find out. But, they have pizza and salad, dessert, good enough for now. Mike takes me around the ship to learn where everything is. 11 decks plus fore, center and aft elevators, it can get confusing. Lido Deck (9) has the buffet, pool, and spa. I brought my workout gear because I plan on lifting weights or doing cardio everyday we are on the ship. Everybody eats too much on a cruise, so working out should help in the battle of the bulge. We tour the gym/spa/pool and then down to Deck 3 for the Dining Room, Vista Lounge, Casino on Deck 2. After the brief tour, back to the cabin to unpack.

I did not take any photos the first day. Here are some shots of the Westerdam. 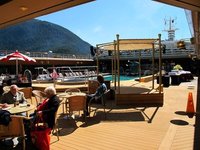 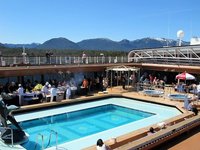 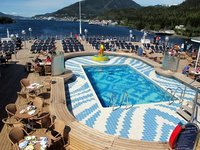 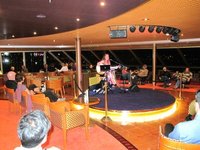 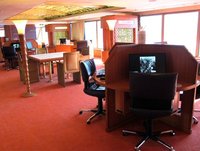 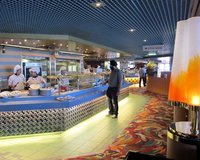 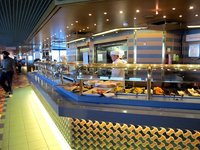 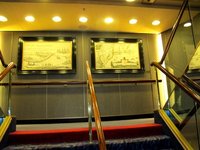 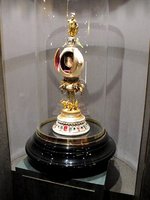 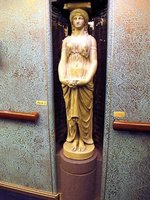 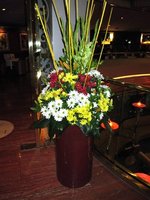 After unpacking and Mike telling me about his week in Seattle, I decided I could lift weights even after eating an hour ago. I took my gym bag and headed for the gym. A small but decent gym allows almost everyone to get in their workout. At 5:30pm the first day, not many were there. Lift, stomach and headed for the showers. Everything is provided and the shower is better than the one in our room. Shower, change and back to the room. Rest, read and chat with Mike. There is a presentation in the Vista Lounge (showroom) at 7pm. Our cruise director Jason introduces the Captain, his officers and tells us what we are can expect the next 7 days. Afterwards, I decide to hit the buffet while Mike heads for the Dining Room. You have 2 choices. Assigned seating at a set time or open seating. Mike used AAA to pay for the trip and our cruise specialist suggested the late assigned seating. You can always head for open seating if you don't like your table companions, same menu. I find out there is no full buffet the first night. The first 48 hours the crew will serve you. Health issue we are told. They do not want passengers touching any of the food. OK, let them serve. I select salad, fruit, rice/veggie, dessert, and chat with those at close by. After dinner, I head for the Casino. One of the guys working out while I was in the gym turns out to be the Casino Host. Young guy named Phillipe. I get signed in with my cruise card and Phillipe shows me how the poker is run on the ship. There is no dealer, a 10 seat poker table with tabletop computer terminal at each place. I find out how it works and start to play. A young couple from LA welcome me and we start chatting. Reid & Eunice are fun to chat with and not real serious players. Most of us just want to play and have a good time. Occasionally a guy would show up that was a jerk, but mostly it was a fun group. Your name and how much money you have is displayed on every computer. We start kidding the other players by name when they raise 'all-in' or make a bad call. The most you can buy in for is $200, so nobody is going to lose too much. By 10:30, we all decide that is enough. Reid & Eunice are on deck 4 as well. We walk back to our rooms and agree to play the next night after the show. Mike is already in bed, so I quietly call it a night. Day 1 of our cruise is over.

Posted by vegasmike6 00:03 Archived in USA