Arches NP, back to Las Vegas

Our plan A was to get over to Arches NP early and get back to Vegas before dark. I set the alarm for 6am but it never went off. Neither Chris or I are good sleepers and he got up at 5am. Chris decided since he was up, I should be as well. Oh well, another hour of semi sleep would not make any difference. We packed up and headed over to Arches in the dark. Of course nobody was manning the entrance booth and we headed straight to the parking lot for Delicate Arch (DA). The last time we were in Arches NP we did not include DA in our plans. This time our plan was to get up to DA before it got too hot. We got our day packs and headed out in the dark. The sun had not come up yet but it was light enough to follow the path. The Wolfe Ranch cabin is at the start of the trail up to DA. 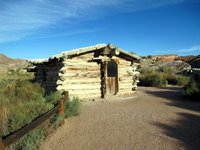 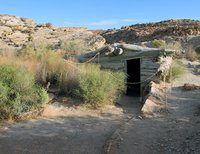 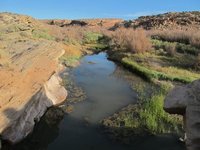 Chris lead the way and I struggled to keep up. My knee was OK, but I knew it was be hurting by the time we got to DA and back. There are huge expanses of slick rock on the way up to DA but there are stacks of rocks that will keep you on the right path. There is no one trail to DA and we saw other hikers going off to our right and left as we went uphill. It is not a difficult or technical hike, but it is strenuous enough that we had to stop numerous times to catch our breath. Other hikers blew right by us, but we were not in a race with them. I was surprised when we got to DA and saw how many were already there. Of course the ones that passed us were there, but so were many other young hikers. They must have beat us out of the parking lot as we never saw them. We both got our photos and headed down. 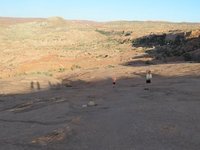 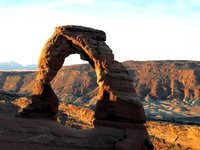 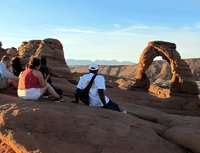 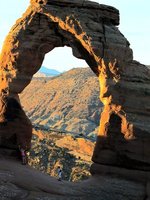 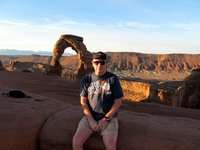 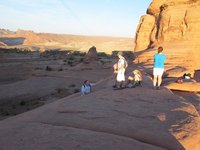 Downhill is hard on the knees and I was really limping by the time we got to the car. Chris had been over to Arches the day before and did not want to photo anything else. I had him swing by the Windows parking lot and got out for a few more shots. It is not too far from the parking lot to the Window view area and I was done in 15 minutes. That was enough for both of us and we headed for the exit. 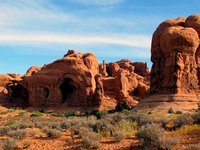 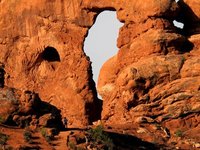 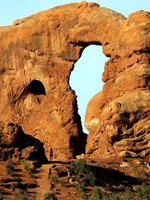 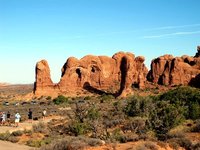 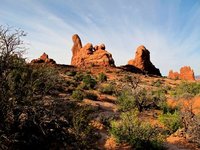 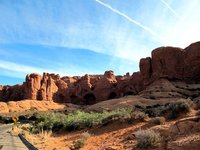 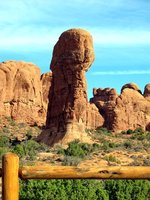 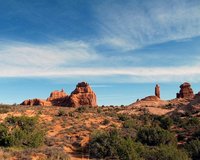 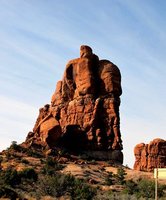 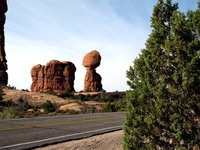 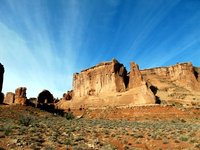 I had Chris stop at the Visitors Center for a bathroom break and refill my water bottles. After exiting Arches, we headed for I-70 and turned south. Chris needed to gas up and Green River UT was the best option. We decided we could make it to Cedar City before eating, so we just drove non stop to Cedar City. I spotted a Subway and got a $5 veggie. Chris filled up with gas while I got my sub. He wanted a burger and found a local spot to chow down. I called my mom and gave her an ETA. I ate outside of the burger joint as I did not want to carry a Subway inside. After Chris finished, we drove to Vegas and made it home by 4pm. Day 4 of our quick tour of AZ, Colo. & UT was over.

Posted by vegasmike6 11:20 Archived in USA