Chris came back from Thailand and we debated where we wanted to go. We chose going over to Arches NP, Monument Valley, then on to the Grand Canyon. We wanted snow on the ground, clear skies and open roads. It snowed in Utah & the Grand Canyon on Dec. 31 and clear skies forecast for the next 4 days. We wanted to watch the bowl games on Jan. 1, so our take-off date was Jan. 2. It was my turn to drive so Chris came over at 6:30am Wed. Jan. 2. Plan A was to drive straight to Cedar City on I-15 and stop for gas. Chris paid for the fuel, I would pay for the motels. We both brought snacks, granola bars for me, candy bars, cookies for Chris. No need for lunch. We decided to drive straight to Arches NP and take as many photos as we could before sunset. We hit Arches NP about 2:30pm and drove to the Landscape Arch trail-head. Bad decision. It was too cold, windy and the trail was in the shadows. We saw a Park Ranger and he advised us that a morning hike made more sense. No argument from us. We drove back to the Windows area and started walking. The sun was still high enough for some decent shots. We hung around until sunset to try and get a shot of the setting sun through Turret Arch. Not really worth the effort was our decision. We took a few, but nothing special. When it was too dark to shoot, we headed out for Moab. 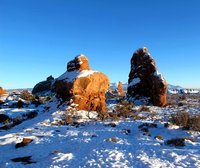 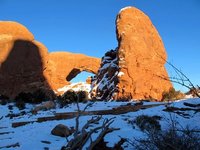 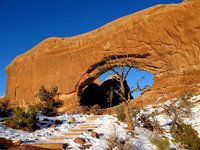 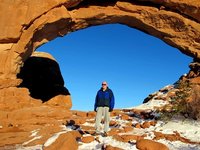 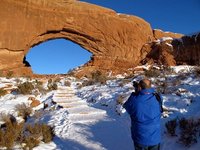 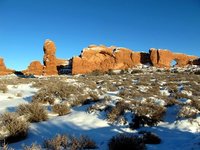 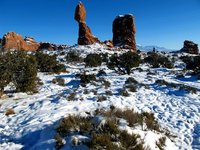 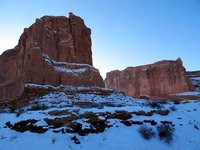 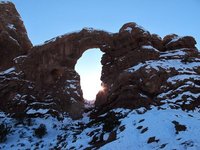 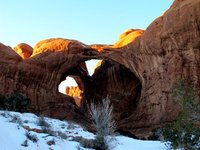 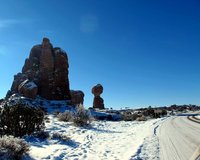 It was pretty cold after sunset, my car thermometer said it was 14 F (-9 C). Pretty cold for Vegas guys. Chris had just come from Thailand, so he was really feeling it. We had not had a real meal all day, so first stop was Denny's. I like BF even at night, so I pulled in when we spotted Denny's. I had pancake & eggs, Chris voted for a burger. Decent food at an OK price. Right next door was a Super 8 Motel advertising $49 rooms. We had stayed at JR's Desert Inn when we were in Arches NP during the summer. Nice big room at a decent rate. We drove through Moab and were going to price JR's. Their sign was off and the door locked. I guess they were not interested in what little trade there was on a Wed. night in Jan. We did check another motel that advertised $49 rooms, but it was pretty run down and no BF. Back to the Super 8 and we checked in. I used my AARP card and the total for 2 queen beds plus hot BF was $53. We pulled as close to our room as we could and unloaded. 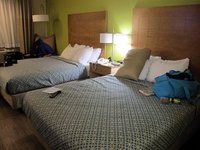 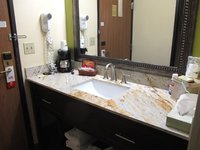 Since it was only a 3 day trip, we each had 1 small bag plus cameras. I thought the room was great. Everything was clean and looked updated. Huge TV, fridge, microwave, coffee maker, very nice room. I gave it a good review on tripadvisor. There was a bowl game on, so I watched football and Chris edited the photos he took in Arches. I showered first and called it a night at 10:30pm. Day 1 of our winter adventure was over.

Posted by vegasmike6 22:26 Archived in USA