Meeting up with Simon & Lisa again.

I met Simon & Lisa Thomas in 2007 when they came through Las Vegas. It was a serendipitous meeting to be sure. A TP British couple, Allan & Gail had messaged me about touring the Grand Canyon. I met them at Circus Circus and we decided to see some Vegas hotels that first day. We toured Caesars Palace, Forum Shops, Venetian, The Wynn and next up was the MGM Grand. I valet parked at the MGM and we started walking towards the hotel. We saw these very large BMW off road motorcycles and walked over to see what was going on. Not many valet park a motorcycle. Allan saw a British flag on one of the bikes and wanted to chat with some fellow Brits. Simon & Allan started talking English football and I asked Lisa about their logo: 2ridetheworld.com. We found out they had been on the road for 4 years and were going around the world on their BMWs. I took some photos, got their address card. I decided to stay in touch with them and follow their journey. If we had pulled into the MGM one minute sooner we would have never met and I would not know about their epic ride around the world. When I reminded Simon of our first meeting 6 years ago, he said, "it was meant to be." That is probably as good an explanation as any. 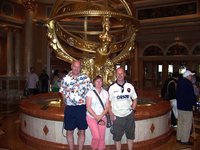 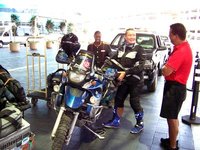 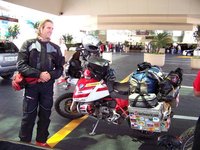 After I got the MGM photos on my computer, I e-mailed them to Lisa. We stayed in touch a few times a year until Facebook became popular. Once they were on FB, I started following their journey weekly. When I saw they were coming back to the US, I messaged Lisa that I would treat them to a Vegas buffet if they came back to town. Simon messaged that they were going to give their presentation at the Las Vegas BMW on June 28th. I looked up the Las Vegas BMW Motorcycle dealership and reserved my spot. I messaged Lisa they were welcome to stay at our house while they were in Vegas. She said they were not sure of the plans after the presentation and they would talk to me that night. I went over early and met Simon while he was still setting up the bikes and equipment needed for their talk. It was great to see him again and reminded him of our first meeting many years ago at the MGM. Lisa arrived a bit later and I again offered them a place to stay if they needed it. It was pretty hectic at that time. Greeting everyone, selling T-shirts & photos, signing autographs and getting ready for their digital presentation. We would leave serious chatting until after the show. Simon does most of the presentation but Lisa chimes in when appropriate. The first half was almost an hour and explained why they left everything in England to start this 10 year journey, through Europe, across the Sahara Desert and then down the coast of Africa. Half time break for snacks and cold drinks. Kudos to Kurt at the Vegas BMW dealership for making the event run as smoothly as it did. Simon & Lisa picked the hottest weekend of the year to visit Vegas. We tied our all time high of 117 (47.3) both Sat. & Sunday. We had 4 days in a row of 115 (46.1) or hotter. It was toasty in an a/c car, forget riding bikes in a blast furnace. Wrong time to hit Vegas. Quick note to all TP members. Vegas is HOT!! June, July August. Best months are Oct. Nov. or March, April. Come then and you will have much better time than trying to slog around in 100 (38) plus heat. After the break, Simon took us up through South America, bit of US, back into Russia, Mongolia, India, the islands of Indonesia, into Australia and finished with New Zealand. Great presentation, beautiful photos and video of the countries they have already visited. Questions after the talk, then many wanted a signed T-shirt, then photos with Lisa & Simon. Many just did not want to leave and hung around to prolong the experience. Finally everyone left and I had a chance to talk with Lisa. I asked her if they were going to stay in Vegas a few days and she said they hoped to. I offered them our guest bedroom and they accepted. 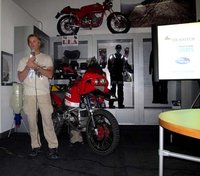 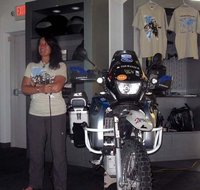 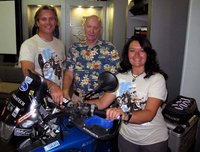 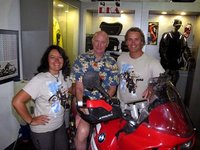 BMW provided a room Friday night, so they would come over Sat. They needed some work done on the bikes at BMW, so we figured it would be after 2pm before they came over. That gave me time for my work out, shopping, errands. I got home, held off on lunch as we were going to hit a buffet. 4pm came and Lisa called and told me they were running late. OK, more TV & reading. After 5pm they were ready to roll. Simon has GPS so he could get to our house w/o directions. I ask him to call when he got to our gated community. He called from the gate and I drove down to get them in. It was 117 (47.2) and they were hot & thirsty after a 30 minute ride to our house. With their bikes safely in the garage, they had a quick shower and changed into cooler clothes. None of us had lunch, so we wasted little time heading for the buffet at Boulder Station. 6pm Sat. night is busy time for any buffet so there was quite a line. Simon held our place and I took Lisa over to the Rewards Center. You get a discount on the buffet if you have a Stations Rewards card. They used to allow 4 diners on one card, now only 2. A short wait to register and Lisa had her own Stations Casino card. Back in line and we had time to chat about their journey, Vegas, whatever. Great buffet at Boulder Station, many choices and it won't break your budget. After eating more than we should, we headed for home. They were both tired and did not want to go out on the town. We chatted about their 10 year journey and then off to bed.

Sunday morning I usually take my mom over to Blueberry Hill for BF. My neighbor Jean was supposed to go with us for the buffet, but she had already eaten by the time we were ready to roll. I called Jean and ask her to join us for BF. Jean is from the same part of England as Simon and thought she would enjoy meeting them. We had a very good BF and then Jean drove them to Walmart so Lisa could fill a prescription. Once back at the house, Simon had to get cracking on an magazine article that was due Monday. Since is 117 (47.2) again, nobody felt compelled to get out and do anything. They needed a relaxing day and I had nothing that needed my attention. Sunday is usually an off day for my work outs. Simon worked on his magazine article while Lisa answered e-mails and updated her journal. Both keep daily journals so they can blog about their ongoing ride around the world. Simon also writes articles for magazines to help raise money to continue their journey. At 6pm we walked over to Jean's house as she had invited the three of us for dinner. Jean is a good cook so I knew we would have a great meal. Stuffed shells, salad, Texas toast & wine for them, salad, bread for me. Good company and good food made for an enjoyable evening. Simon had more writing to do, so he and I walked home around 8pm. Lisa stayed for some girl talk with Jean. A little TV, a chat with Lisa , some reading and I called it a night. I found out Monday that Simon stayed up after 2am trying to get the article done.

Monday was forecast to be just as hot as Sunday, another 115 (46) plus day. BF and Simon headed back upstairs to finish his article on his computer. Around noon he had completed his writing and e-mailed it the magazine. I fixed a quick lunch for them and then they started loading up the bikes. 2pm and they were ready to roll. Mom came out to see them off and Jean walked up the street as well. A couple of photos and they rode off into the Vegas heat. They had to go back to the BMW dealer for a new tire before riding down to San Diego. They have several presentations scheduled over the next few weeks in Calif. to raise money to continue their around the world adventure. It was great to see them again, spend some quality time and hopefully we will meet again one day. Safe riding Simon & Lisa. 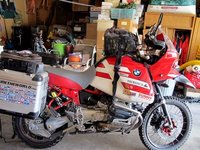 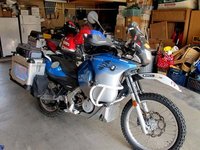 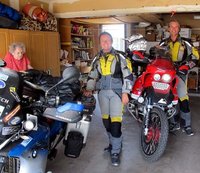 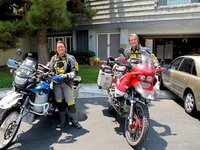 Posted by vegasmike6 16:11 Archived in USA

Great Blog Mike, and a really nice couple, can't believe it was 2007 when we met Simon & Lisa, you never know we might see them back in dear old Blighty one day !!!!!

Allan you just might. Lisa told me that they had a few more years on the road and then back to the UK. Lisa e-mailed a Christmas greeting and they will be back in the US in 2015. Hopefully they will pass through Vegas or in So. Calif. I will go down to see them if possible. Now, Allan, when are you coming back to Vegas? You always have a free bed here Allan!