A good friend of mine, Gregg Albracht is a professional photographer and stays at our house when he comes to Vegas. Gregg has changed his focus from regular landscape& horse photography to a more artsy, abstract type of photos. He has shown me his portfolio of his new work, but I have never seen his work full sized and framed. He told me that he had signed up for the Spectrum Art Show at Indian Wells mid March. I told him I would come down for the last day of the show, March 20th. He called Sat. the 19th and ask me if I was coming. I said yes and told him I would be there for lunch. Sunday is when many of our California visitors head home and I-15 South gets very busy. I saw that there is a General Patton Museum not far from Indian Wells and decided to stop there first. I was out of Vegas by 6am and took US 95 South to Needles to avoid the traffic going to the LA area. Turned onto CA 62 to 177, meeting up with I-10 at Desert Center. I made it to the General Patton Memorial Museum before 10am. Paid the senior price of $5.50 and hit the bathroom! I drove non stop from Vegas and needed a break. Now I was ready to walk the museum and get my photos. There is a continuous film on General Patton running in the first room. It told the story of how the Desert Training Center was picked for training tank and armor crews before shipping them off to fight during WWII. Over 1million men were trained at the DTC before WWII was over. The Patton Museum sits where Camp Young was at Chiriaco Summit.

After touring the museum, I put the hotel address into my GPS and got on the I-10 to Indian Wells. Turn by turn it took me right to the parking garage of the Renaissance Indian Wells Resort. I got my camera and headed for the Art Show. You see the outdoor exhibits first and since it was not going to get any cooler than now, I took as many as I wanted before finding Gregg's booth.

I went inside and found Gregg. He had a great location, right by one of the doors going into the convention area. He asked me to man the booth so he could hit the restroom. They were still serving a light lunch when I got there. We had some OJ and toast. Not a great lunch, but hey, it was free! We had a nice chat and then I strolled the show to see what else was on display. This is the first year for Spectrum putting on the art show at Indian Wells. Attendance was OK, but certainly not busy. Spectrum told Gregg that they would give him a deal on a booth for their new York show in April. I have not found out from him if going to New York was worth the time/effort. Here is Gregg's website if you like his work. 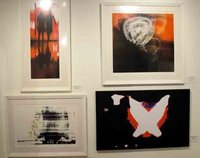 Around 3:30pm I decided to start heading back to Vegas. I said goodbye to Gregg and had a granola bar once I got back to my van. I was not going to take the same route home, so I head for Palm Springs on I-10. I did not want to stay with the heavy flow heading for San Bernadino so I got on CA62 that leads to Twentynine Palms. I stopped at a Wendy's and had a salad, frostie and headed on a small road that ends at Amboy. Very few cars on the road at this time of day. I had been on this road many years ago when I went to Palm Springs via Cima, Kelso. I saw a gorgeous sunset as I was getting close to Kelso and stopped. I stopped several times until the sun set and just kept trucking to I-15. It took about 4.5 hours to get home this way, but it was much more scenic that than just getting on I-15 at Barstow. It was a long day, but worth the time & money to see Gregg's photos displayed and see that sunset.