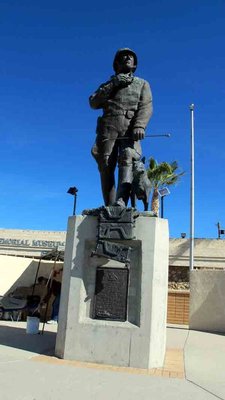 George S. Patton was born Nov. 11 1888. Fought in WWI and became the first Commander of the Desert Training Center. Gen. Patton wanted his tank troops to have the training necessary to fight and win in North Africa, Europe and the Pacific. Gen. Patton became a 4 star General and one of the most decorated and controversial Generals of WWII. He was killed in an auto accident Dec. 21, 1945. The movie 'Patton' telling his life story was released in 1970 and won 7 Academy Awards including Best Picture and Best Actor for George C. Scott.