We get up at 7am and head for the BF room. The Super 8 really puts out a good spread. Waffles, hot & cold cereal, fruit, toast, bagels, donuts, hot & cold beverages. I choose waffles, fruit, hot choc. We take a few bananas for lunch and off we go. Bernalillo is north of Albuquerque and perfect if you are heading for Chaco Canyon (CC). A hour or so up 550 and you turn onto a dirt road at the CC sign. We get to CC by 10am, pay the $8 fee then hit the bathroom. Very basic facilities at CC. They are using a trailer because they are building a new visitors center. We were the first ones to arrive according to the ranger. Chris has been here before but not in the winter. It is cool & windy, but at least it is sunny and not really a bad day. CC is basically a loop and we head out. The best place to stop IMO is the Pueblo Bonito/Chetro Ketl lot. We grab our cameras and walk the entire loop. Some of CC is in decent condition, but most of the buildings are in pretty sad shape. You can see where the buildings were, but most are now just low walls. All the ceilings fall in over time. After over an hour of walking, my knee hurts and we have enough photos of CC. & the petroglyphs. We retrace our way onto the dirt road heading for 550. 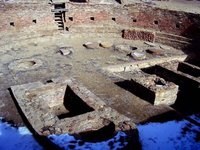 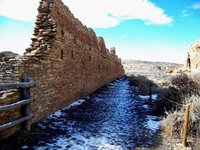 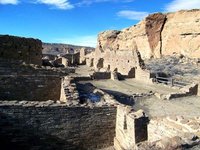 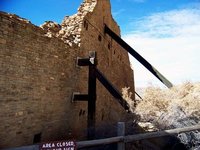 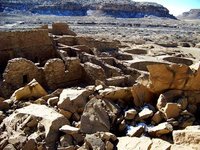 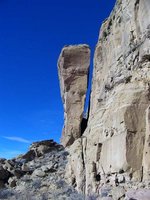 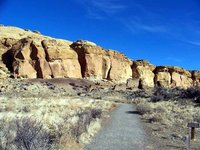 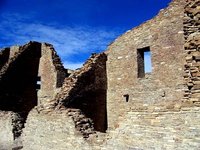 After leaving Chaco Canyon, we head north on US 550 to Durango. We gas up in Durango and head west on 160 for Mesa Verde National Park (MVNP). As the road climbs, we start to get light snow. MVNP is open all year, but not many attractions are open during the winter. We hit the entrance fee booth, pay our $8 and talk to the ranger. They are offering ranger led tours of Spruce Tree House at 3:00pm he tells us. If we push hard we could make it. Did not happen. It is 21 miles at 35mph to Spruce Tree House. There is road repair going on and we wait for 15 minutes while they hold up traffic. We look at the map and decide to do the Chapin Mesa loop before the Museum. It is snowing hard now, cold and windy. Really unpleasant to get out of the car. We do snap a few photos of cliff dwellings across the valley from the observation pull outs. That will have to do it for us this time as it is getting dark by the time we leave MVNP. I visited MVNP many years ago during the summer and will visit it again when it is warmer. MVNP is worth a day of your time IMO. 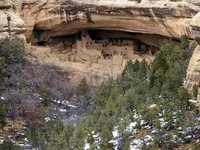 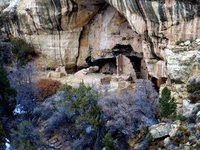 After leaving MVNP, we head west on 160 for Cortez. Before we get to Cortez, the snow has stopped and it is OK again. We both want to visit Four Corners (FC). This is the only place in the US that 4 states have a common border. Utah, Colorado, New Mexico & Arizona all meet at FC. In all my years traveling around the west, I have never stopped to visit FC. We get there at 5:15pm and are in for a rude shock. The gates are closed and 'No Trespassing' signs are everywhere. It seems the Navaho Nation have taken control over FC. Years ago a friend of mine slept with his head in AZ and his body in NM. Not anymore. The Navaho control access to FC and now charge an entrance fee of $5. Chris and I try to find a motel not too far from FC so we can come back in the morning. No luck. The closest place is Cortez and that is the wrong way for us. We decide to motor on to Kayenta AZ. Smack dab inside the Navaho Nation, Kayenta is the only town around with any size at all. We gas up and start looking for a room. It won't take long as there are only 3 places to stay in Kayenta. We price each one and it is going to be the most expensive room of the trip. The Wetherill Inn gets our business as it is $76 for 2, taxes included. It includes WiFi and BF. Both others are closer to $100 when taxes are included. Chris and I book a room and head out for something to eat. Kayenta has a few selections, but we vote for Subway. A $5 foot long and that will do for tonight. We go back to our room, shower, some photo editing, TV, and bed by 10pm.