Spending the day in Yosemite NP

We got up at about 7am, packed and set off for Yosemite NP (YNP). The Redwood Motel is OK, but would not recommend it. Not worth $100/night IMO. No BF either. We took 395 back to Lee Vining. turned on 120 and head uphill to Tioga Pass. Snow still visible the last week of August. We stopped at Tioga Lake for some photos and pulled up to the Tioga Pass Entrance . Since we got our Lifetime Senior Pass at Mono Lake yesterday, we were waved in by the Ranger. The Tioga Pass entrance is not open in the winter. We stopped at several overlooks and then pulled off for Tenaya Lake. Tenaya Lake is just beautiful, worth pulling off and walking the shoreline IMO. Great photo ops. 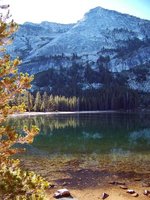 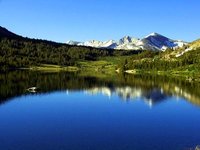 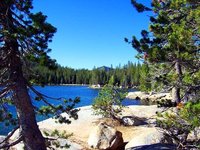 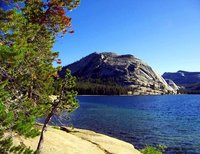 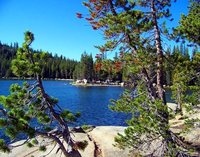 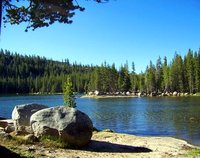 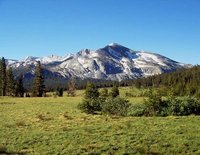 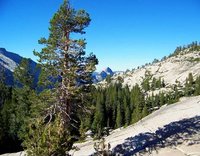 We continued on until we hit the Southside Drive, a one-way road that takes you to the Yosemite Valley Visitors Center. First stop for us was Bridalveil Falls. It is not a long hike to the viewing area, but it is steep in places. We got out photos and continued on. Many cars are stopped along the Southside Drive and decided to stop as well. With a short walk, you can get a good view of Upper Yosemite Falls. A few more photos and we head for the Visitors Center. 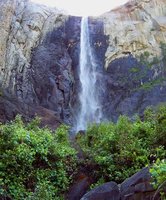 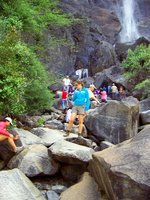 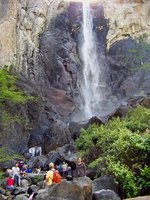 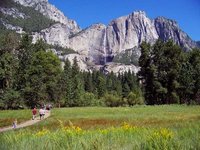 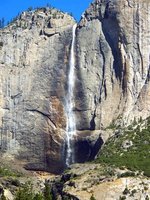 We decide to park at Curry Village, got some candy bars, water and waited for the shuttle bus. The shuttle will take you to the trailhead for Vernal & Nevada Falls. Our plan was to hike as far as we could up to Vernal Falls (VF). This was where 3 hikers died in early July. 3 young hikers climbed over the metal guardrail at the top of VF. Fellow hikers urged them to come back over the guardrail, but the trio wanted better photos of the falls. All 3 were swept to their deaths over the 317 ft falls. One body had been recovered when were there late August. It is doubtful there other 2 bodies will ever be recovered. One foolish decision can cost you your life, even in beautiful YNP. The Ranger at VF told us an average of 12 people per year die in YNP. The hike is only about 1 mile to the falls, but it is mostly uphill. We both had to stop numerous times to rest. We made it to the bridge over the Merced River, used the bathrooms and talked to the Ranger stationed at the bridge. Chris and I debated if we could make it to the top of the falls. After a 15 minute break, we decided to try. I made it to where the stairs start that take you to the very top. My knee was killing me and I turned back. Chris went on, but he did not make it to the very top either. Too many steps and he decided it was not worth the effort. I should have done this hike 20 years ago! It took us a long time to get back to the trailhead. Going downhill is not easy on a sore knee, that's for sure. I limped onto the shuttle bus and knew I was done for the day. I took some Advil, and hoped it would help. That was about all the walking I was going to do today. We wanted to stop at the Visitors Center, but the parking lots were packed. August is NOT the time to visit YNP. We headed out, stopping for Lower Yosemite Falls. The Lower Falls is easily the most used location for waterfall photos. An easy walk from the parking lots. Last stop at the Valley View exit. Great last look at the valley. 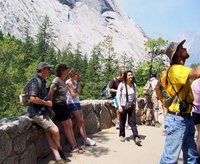 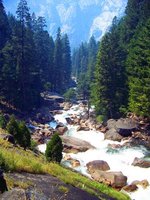 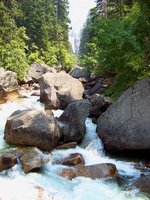 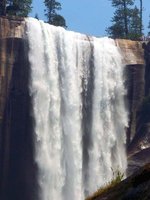 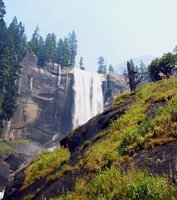 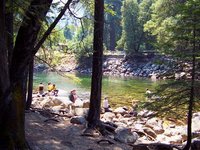 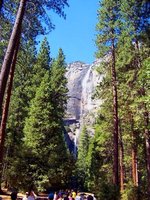 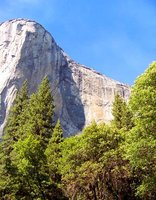 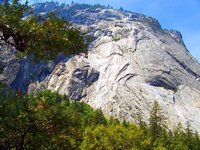 Now we just headed for Fresno, taking SR 41. We decided to stop at motels south of Fresno, along SR 180. We saw a Denny's and stopped for dinner. It was after 6pm by now and we were both hungry. I had BF and Chris had a burger, no surprises at Denny's and good value IMO. Alongside Denny's was an Ecno-Lodge. Since it was right there, we went in for a quote. She quoted us $50 using AARP discount plus tax. I am sure there are better places to stay, but it had 2 beds, pool, BF. Good enough after a long day. We paid cash and headed for the room. Basic but clean. I wanted to shower and get off my sore knee. Chris wanted to look at his photos on his laptop. A couple hours of TV for me, photo editing for Chris and we called it a night. Day 2 of our Calif. adventure was over.

Off to Sequoia NP

Last day of our Calif. Adventure. 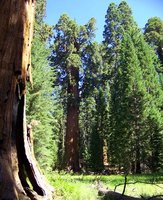 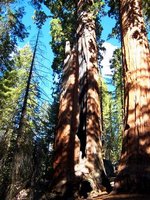 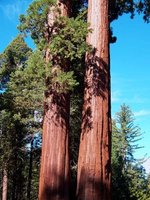 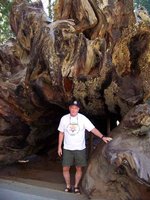 Chris and I got up at 7am, cleaned up and got ready to leave. Headed over to the BF room. Weak BF, but we had a few donuts, tea and took some bananas for lunch. Loaded up with gas and head over to Sequoia National Park (SNP). State Highway 180 East is the direct route. About an hour later we entered SNP. They are doing a lot of road construction in SNP this summer. We had to wait several times for the road crews. The road is down to one lane and you take turns following the pilot truck passed the road repairs. We head over to the Grant Grove Visitors Center. We got our maps and decided to walk the General Grant Grove first. It is not a difficult walk, but both Chris and I had sore knees from the killer hike yesterday in Yosemite NP. We completed the loop and got the photos we wanted. The Fallen Monarch and the Lightning Trees are interesting as well as the standing giant Sequoias. After General Grant we had a choice: take the 2 hour loop over to the Cedar Grove Area or head South, hit the General Sherman area then head for Vegas. We both voted NO on a 2 hour drive to see more of the same trees. Off we go to Lodgepole Visitors Center, then over to the General Sherman area. 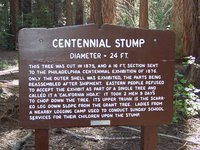 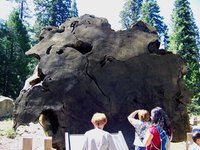 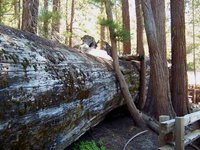 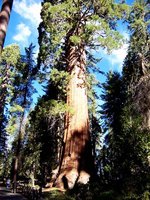 We cheated a bit and used the handicap parking area, much closer to the trees. I have a handicap placard from years ago when I had a broken leg. My knee was hurting enough to justify using it. We toured the General Sherman area, got our photos and I limped back to the car. Chris and I agreed to call it a day and head for home. We waited almost an hour for road construction on State Highway 198 exiting SNP. We linked up with 99 and stopped in Bakersfield for gas. Took 58 through Tehachapi, home of one of the largest wind farms in Calif. Hundreds of wind turbines spinning makes for a nice photo.

We took 58 until it hooked up with I-15 at Barstow, got home about 7pm. Our 3 day adventure to the Calif. NPs was over.