One of the Senior centers where I deal Hold 'Em poker offered a tour of the Las Vegas Neon Museum aka Neon Boneyard (NB) last month. Carl and I decided to go and paid our $10. Seniors normally pay $12, $15 everyone else for the day tour. The day of our tour we all met at the Las Vegas Senior Center, close to both Fremont Street and the NB. We walked over as a group and waited for our tour time. 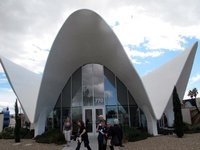 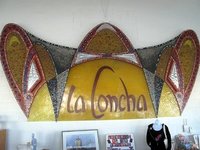 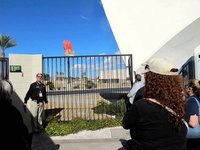 Our guide Mitch introduced himself and he found out where we were from. Four locals, guys from LA, a couple from Chicago, some from Florida. The tour follows a set path going counter clockwise as you enter the boneyard. Hotels, motels, bars, restaurants have donated their signs over the years and Young Electric Sign Com. (YESCO) stored them at their own facility. The City of Las Vegas decided that they wanted to display some of the more famous signs and worked out a deal with YESCO. This land was made available for the Neon Boneyard and the project began. When the La Concha Hotel was torn down to make way for another project, the NB wanted their distinctive lobby for their entrance and gift shop It was cut into seven pieces and trucked to this location. Then it had to be re-assembled and became the centerpiece of the NB. The sign out front was made from letters from Golden Nugget, Caesars Palace, Binion's Horseshoe, Desert Inn, star is from the Stardust.

Mitch told us the rules, stay on the path, don't cross the rock barriers (one lady did and got chastised), no tripods, no video. OK, I can live with that. The tour starts out with older signs, motels, restaurants. He gave everyone enough time for photos and explained the history of many of the signs. The Golden Nugget sign has 1905 on it and it certainly did not exist in 1905. It was built in 1946, greatly re-modeled in 1973 when Steve Wynn bought it and the first hotel tower opened in 1997. The GN then became the classiest hotel downtown. He asks us why 1905 is on the sign and I provided the answer. Las Vegas had a land auction in 1905 and we officially became a town. Las Vegas means 'the meadows' in old Spanish. This is why people have been in the LV Valley for thousands of years. There was a natural flowing spring where The Springs Preserve is now located. We had fresh water and life depends on water when you are in a desert. We were a water stop for the trains running between Salt Lake City and Los Angeles. I am sure Mitch got tired of me answering his questions for the group, but hey, I was born in Vegas and knew the answers. Hard to resist showing off for the tour group! Several of the others on the tour starting asking me questions about growing up in LV and how the city has changed since I stared school in the 50s. 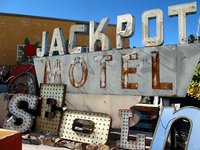 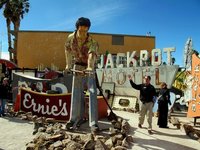 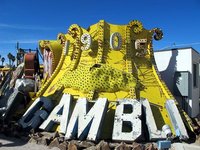 On we go until we head for the exit. The newer, better known signs like the Stardust and the Riviera are at the end of the tour. As you can see in the pictures, we had a decent day. It was a bit windy, cool, bit overcast but overall a nice day for Feb. 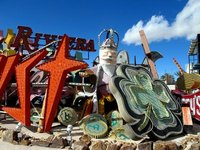 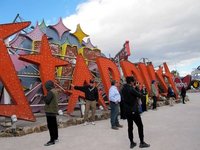 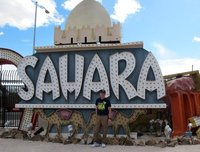 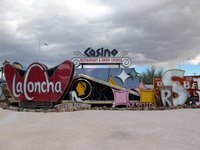 I enjoyed the tour of the NB and would recommend it to visitors that have an hour to kill when they are downtown.